Why Farmers should not have to pay for Ruminant Methane emissions. 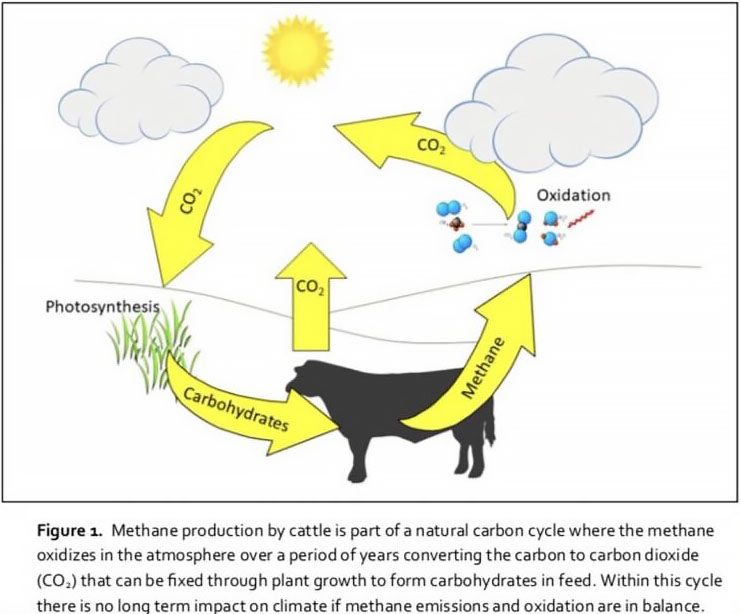 HELP US FIGHT THESE UNFAIR TAXES ON FARMERS.

Article 2 of the Paris Accord specifically excludes countries from taking action to reduce emissions that threaten food production.This requirement is currently being ignored by NZ.

The facts about Ruminant Methane do not support the claim they are a major contributor to global warming.

Methane is a trace gas that exists in minute quantities in the atmosphere.

The atmospheric concentration of Methane is around 1.9 parts per million or 0.00019% which is equivalent to a small bucket of water in a 2.5 million litre Olympic sized swimming pool or just 9 people in team New Zealand’s 5 million population.

Ruminant Methane is a part of a natural cycle as shown in the adjacent diagram. Ruminants, such as sheep and cattle, emit Methane into the atmosphere that quickly breaks down into Water Vapour and Carbon dioxide.  This Carbon dioxide becomes essential plant food taken up by the grass that the animals eat.  This completes the natural cycle.

In our relatively stable emissions’ scenario, the atmospheric concentration of Methane does not increase so these emissions cannot be blamed for causing warming.

Despite this farmers will be required to reduce these emissions as legislated in the Zero Carbon Act, and stipulated by the agreement He Waka Eke Noa that Federated Farmers, DairyNZ and Beef and Lamb have struck with the Government.

This agreement ignores the facts about Ruminant Methane and may cost farmers hundreds of thousands of dollars in the future. It is patently unjust to require farmers to pay taxes on these ruminant emissions or reduce the emissions when it has never been established as being necessary.

FARM will be working hard to see that no farmer has to pay taxes or reduce emissions when it has never been established that these emissions need reducing.

FARM will be promoting the facts about Ruminant Methane when it comes to developing an appropriate policy response to any future increases of Ruminant Methane that may occur.  The likely impacts of any increase is currently overstated and is not considered alongside the likely benefits increasing NZ’s food production will provide for humanity.

Government regulations are aimed at meeting impossible and unnecessary targets.  Forcing farmers to pay for Methane emissions will cripple our best performing sector at a time when the economy needs agriculture to be at its best.

At $35.00 carbon price an average dairy farm will pay over $60,000 under the Climate Change Response (Zero Carbon) Amendment Act if the full price is applied.  The Government’s own Productivity Commission has stated that the price of carbon would need to go much higher to achieve “green” goals.  The Commission said to reach a “low emissions” economy by 2050, the price of emissions would have to rise from around $21 to between $75 and $152 per tonne of carbon. To reach “net zero emissions” the price needed to rise even further: to between $200 and $250 a tonne.

Of course no government is going to bankrupt an entire industry is it? Perhaps not for now, but it is far easier to stop the train from starting its journey than once it has a full head of steam.

By allowing the myth that Ruminant Methane emissions need to decrease to become entrenched in climate policy and to allow a farm emission pricing scheme, which is based on that myth, to even get started is allowing the train to leave the station. There will be no stopping it.

Join FARM. Help us to promote the facts about Ruminant Methane
emissions and ensure fairness for NZ farmers.
* Using the Lincoln University carbon calculator an average dairy farm at $35 a tonne for carbon will pay $60,000 p.a. if no discount is applied.  The goal of climate policy is to lift the carbon price to be $250 a tonne, which would cost over $300,000 without the discount.

Get updates on news, events and latest research findings